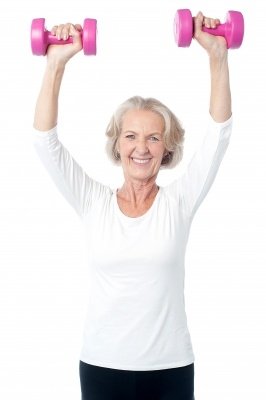 Muscle Mass Index as a Predictor of Longevity in Older Adults

According to a recent study by Uni of Los Angeles researchers, if you wish to live longer you might need to build muscles as “Muscle Mass” is shown to be a more important longevity factor than the “Body Mass Index” after 55 years of age: There is a correlation between living longer and more muscle mass in the elderly. Article was published in the American Journal of Medicine and the study was a result of analysing 3659 data collected from women over the age of 65 and men over 55 as part of the survey done between 1988 and 1994 and they identified the causes of death later on in year 2004 and they found the median age at death to be 82.7 years and ten of these people lived more than 100 years.

They measured muscle mass by using the bioelectrical impedance analysis by passing an electric current through the body and they tried to see a correlation between the muscle mass they measured and different risk factors of death, like age, smoking, cardiovascular risk, cancer history and a second study comparing mortality with Muscle Mass Index and Body Mass Index- BMI. Mortality caused by any of the factors investigated was found to be significantly lower in the top 25% muscle mass index people as compared with the lowest 25%- a reduction of 19 to 20% whereas they found no statistical significance between mortality risk reduction and a low body mass index. So the health professionals should worry more about increasing the muscle mass of their patients than focusing only on their BMI- Body Mass Index or their weight. They should advice them accordingly with the proper suitable exercise programs and healthier nutrition that includes a good balance of minerals, vitamins, protein- amino acids, good fats and Omega 3 fatty acids, anti-inflammatory foods etc. to help them maintain their muscle mass.

This study has its limitations like any study and doesn’t prove any cause and effect but it still suggests a good relationship between increased muscle mass and lower risk of death in elderly. These two researchers are the authors of another study published in the Journal of Clinical Endocrinology Metabolism that reached the conclusion that more muscle mass is equal to reduced risk of metabolic diseases like type 2 diabetes. Many other studies also concluded that it is very important to have an optimal muscle mass when you get older. We all start losing muscle in our 40s and by age this loss gets bigger and bigger- in their 50s and 60s, which is called sarcopenia and you may think that you’ll be OK by maintaining a stable weight but this is often not the case as your body composition changes- more fat and less muscle, fat being a risk factor and muscle being protective. Muscle aging is by loss of mass, strength and volume, muscles functioning worse with contraction changed and muscle wasting is like the snow melting and you will simply need to eat healthy foods that will feed your muscles and maintain a good balance in your body and exercise regularly, preferably at a gym and you need to be careful with the pills and supplements and take them under medical supervision.

Please note that we do not own the products reviewed on this site. We are only reporters and reviews are based on carefully researched and gathered information online and offline to help you make better shopping decisions.